Some Points About Points 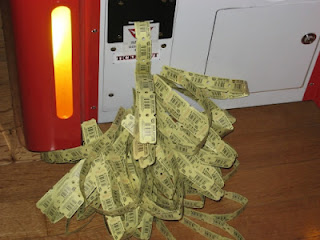 I've been an NHC Tour member for four years now, for reasons such as a T-shirt, eligibility for the annual National Handicapping Championship (that hasn't come in handy for me yet), and of course the glamour and glory of it all.

During this time period I have also been vaguely aware of the existence of something called NHC Tour points. While I imagine I finished 1,791st or the like on at least one year's point scorecard, if only for my good looks, I always figured points were for the real hardcore NHC guys, you know the ones who show up in most online contests with two or even three entries, and who fly around to live events. I'm not that good of a handicapping contest player and I don't have the capacity to be more than a semi-regular contest player, so   I've always felt like the 15-1 shot in the points race, going up against top outfits with multiple-horse entries and 8-5 morning lines.

But some fringe success (a very lucky 10th place in an online free-for-all, 27th place in a full-field NHCQualify, and 12th-place finishes in a HorseTourneys.com game and a recent Monmouth live event) so far this year has me at 2,816 points, good for 56th-place in the points standings. Given that the top 100 points finishers at year-end are guaranteed spots in the NHC, I've come 'round to the notion that this may be a viable way to punch my ticket.

I'm not concerning myself with the Top 10/20 stuff, at least at this juncture, as I concede that turf to the Ken Seemans, Paul Shurmans and Sally Goodalls of the world. But last year's 100th-place points finisher, Donald McNeil, had 4,309 points, which is certainly within striking distance of my 2,816.

Of course, I'll need to do better. Four point placings is pretty solid for a semi-regular player at midyear, but 10th, 12th, 12th, and 27th ain't exactly the stuff of greatness, either. I reckon I need at least one Top-10 finish to give me a real chance at year-end.

Of course I'm hoping for a Top 3, 2, or 1 contest finish that would get me to Vegas by itself and make this points discussion moot, but until then, I'll be tracking the standings.